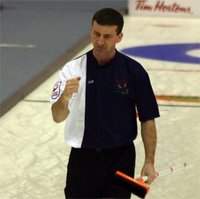 REGINA – Mark Dacey (CurlingZone photo) is pumped after his brilliant soft double-takeout for two points on last rock, for his 6-5 win in the Page 3/4 game.

Moments earlier, Dacey exulted with his broom high in the air. At the same time, and through the next five minutes, second Rob Harris was the epitome of a somewhat shorter (and less green) Lou Ferrigno, as he hulked and pumped away like a madman. Urrrrgh, Hulk likes to win game.

And it’s not every day you beat the mighty Kevin Martin twice in 24 hours and send him packing from the Brier. The last western team in this western Brier.

Dacey moves into tomorrow’s CBC semi-final, versus the winner of tonight’s all-eastern Page 1/2 game between Ontario and Quebec.

Dacey, the former Saskatchewanese, has a great record against Albertans in Brier play, which is the exact opposite of what happens on the Grand Slam circuit. They just pound us at the Slams, said Dacey (now 3-5 versus Martin lifetime). There’s no rhyme or reason to it.

At the Slams, three or four and out is our normal. I think it’s different when you get into something you’re 100 per cent committed to and motivated for.

Oops. Wonder what Slam gatekeeper and Players’ Association chief Paul Boutilier would say about that? Come to think of it, where did Boutilier go? One moment he was at the CCA news conference, seemingly ready to answer media questions about why he is supporting the CCA‘s Jeff Stoughton fine, and the next moment he was gone, without answering anything. Hmmm.

More Dacey, on the pundits who predicted the top three teams to be Ontario, Manitoba and Alberta… ie. his team’s lack of respect from the curling world:

You guys (the media) are writing that stuff. This is sports after all and we all know crazy things happen. We don’t care about what outsiders think (of us), we’re a team that focusses internally.

We were struggling out there. If we go out there and try to play a curling game, we’re off (losing) in six ends. So we tried something different. Mark (Johnston) suggested we run up and down all game and try to nip him (Dacey) at the end. It almost worked.

Helluva shot, right guys? Geez, what a shot. There’s not much else to say.